Well, we’re just back from a week in Sicily, where we lay on the beach, ate a lot of fish and drank the occasional Negroni. I also scribbled an outline for a projected future novel and managed to find time to catch up on my reading. 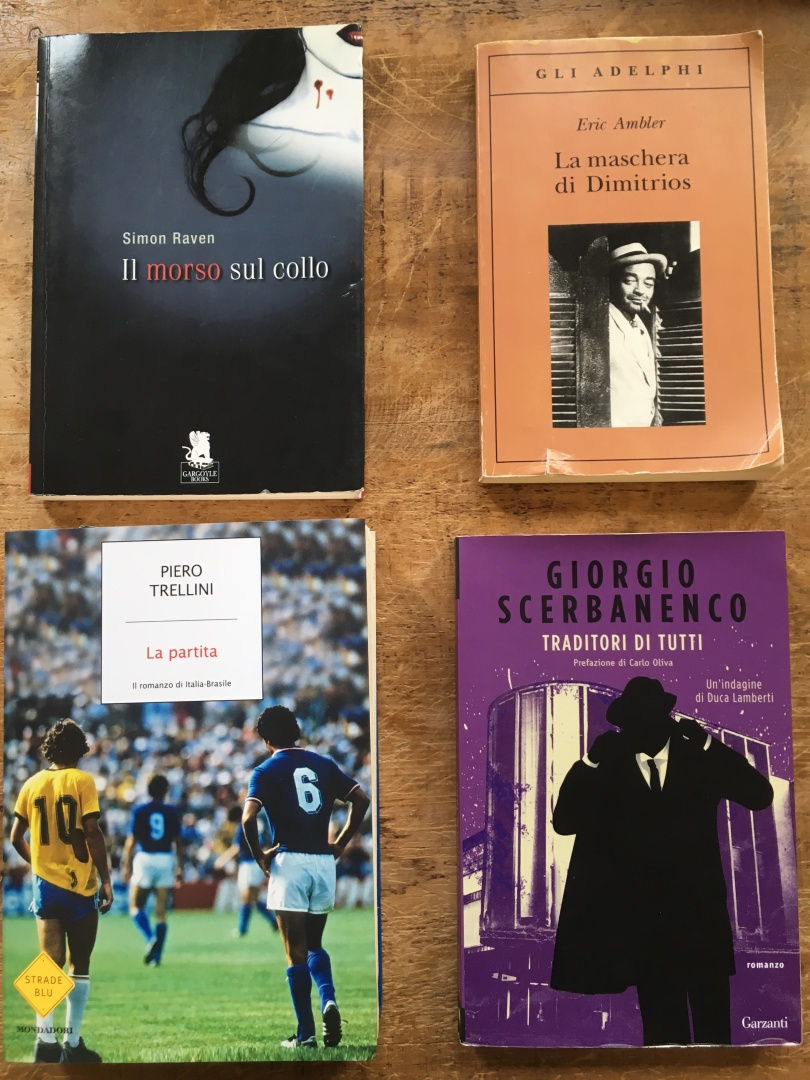 I’ve recently been revisiting Eric Ambler for the first time in many years, and “The Mask of Dimitrios” is generally reckoned to be his masterpiece. And rightly so. Ambler was an absolute master of the early spy thriller; he writes convincingly about place, his historical accuracy – at least as far as I can tell – is top-notch, his characters are well-drawn and his dialogue crackles. Above all else, there’s a thoroughly European feel to Ambler – he never resorts to the cheap stereotype of the funny or sinister foreigner. These feel like real people struggling to make their way in a chaotic post-war Europe. Highly recommended

Giorgio Scerbanenco was an Italian writer who turned to crime (if you see what I mean) after a long career writing everything from westerns to science fiction to romance. He died in Milan in 1969 at the age of just 58, during his period of greatest success. Sometimes referred to as “an Italian Simenon”, his most famous works are probably the Duca Lamberti series, following the adventures of a physician who turns to detective work after having been struck off for performing a mercy killing. I read the first book in the series, “Venere Privata” last year, and enjoyed it enough to give “Traditori di Tutti” (Betrayers of All) a go. He’s a good writer, there’s no denying that. The problem I’m having with the series is the sheer, remorseless cruelty that veers into outright sadism, made all the worse by the matter-of-fact prose. Any chapter that begins with a description of the workings of a band saw in a butcher’s shop is not going to end well. Scerbanenco was, by all accounts, a shy and gentle man, scarred by the trauma of fleeing the Ukraine as a boy and the hardships of his early years. I think I’ll continue with the series but, as I said, I find the clinical descriptions of violence a bit difficult. Maybe I’m just getting old.

Piero Trellini‘s “La Partita” recounts, in absolutely forensic detail, the epic Italy – Brazil game from the 1982 World Cup. It weighs in at a wrist-breaking 600 pages but, surely, if any game deserves covering in this depth, this one does. Having drawn against reigning World champions Argentina, an unfancied Italian side featuring, in Paolo Rossi, a striker only recently returned from a two-year ban following a betting scandal, beat perhaps the greatest Brazilian team of all time in a performance that in terms of sheer bloody-minded iron-willed determination can only be described as absolutely heroic. The greatest game of all time? Perhaps. (I’d also make a case for Swansea City’s win over Bradford City in the 2013 League Cup Final, but I accept I might be in the minority.)

Finally, and rather wonderfully, I came across a second-hand copy of Simon Raven’s Doctors Wear Scarlet in a tabacchi in Aci Trezza where I was buying bus tickets. I must say I prefer Raven’s original title to the rather over-literal Italian one of Il morso sul collo (“The bite on the neck”). The book was one of Raven’s earliest, before he set out on his epic “Alms for Oblivion” series, which is what he’s mainly remembered for. I’m glad he’s still read, and even more so that he’s read in translation. Incidentally, Doctors Wear Scarlet was filmed in the early 1970s as a low-budget horror called Incense for the Damned. It’s not completely without interest – it is, as far as I know, the only film to feature a donkey chase and Peter Cushing turns up for five minutes to add a bit of class – but, by any objective standard, it really isn’t very good.

So there we go. Elsewhere, things are now moving towards publication of Nathan Sutherland Book 4. We have a cover at last but…I’m not going to show you that just yet. Watch this space!