Back, then, from two weeks in Sicily where we are a lot of fish and drank the occasional Negroni. I even managed to get some work done. Edits for “The Venetian Masquerade” have been marked up, and I’ve got a story ready for Book 4 (‘The Arctic Blue Book’ as it’s called for now.)

Arrived back home to find a little treat waiting in the shape of the CD box set of “The Venetian Game”. This is produced by Oakhill Publishing and is for use by libraries – otherwise it’s the same as the recently produced Audible edition. As you can see, they’ve tweaked the cover design – quite different, more classical looking perhaps, but I like it.

In other news, we’ve managed to sell the German translation rights for the first two books. The first one won’t be out until 2020, so there’ll be a bit of a wait until there’s any more news but still – very exciting.

Similarly there’s a few events coming up in the next few months, including the “Mesthriller” crime fiction festival in Mestre. Again, more news a bit nearer the time.

Venice is punishingly hot and humid at the moment – obviously I expect no sympathy at from those of you in the UK. In an effort to escape the heat, Mimi the cat has taken to sleeping under the sofa or outside on the balcony at night. I think she might be on to something… 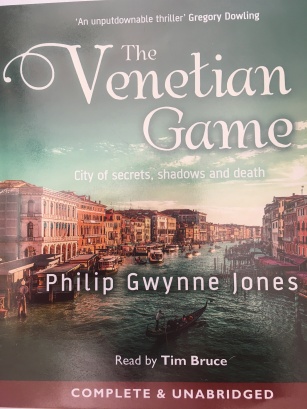 Finally, on a sadder note, I’ve only just found out about the recent death of the author and critic Jessica Mann. I never met her, but was absolutely thrilled when she gave “The Venetian Game” a nice review in the Literary Review last year. For a first-time novelist, things like this really do make all the difference.  Thank you, Jessica.