“The best part of the Biennale…is always the Vernissage.”

There aren’t that many perks to being Honorary Consul in Venice, but Nathan Sutherland does at least receive an invitation to the official opening of the British Pavilion at the Venice Biennale.

A chance for prosecco in the sunshine, and to meet some of the greats of the art world. And then a world-famous critic is decapitated by one of the installations. A terrible accident, it seems, until a postcard is discovered in the victim’s pocket. An image of Judith beheading Holofernes. 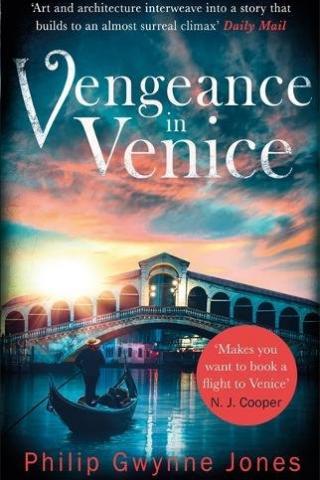 Then a viperous arts columnist receives an image of The Death of Marat. A journalist with a shady past receives a postcard of Dore’s Triumph of Death. And a corrupt agent receives Mantegna’s Martyrdom of St Sebastian.

As the bodies pile up, all signs point to Paul Considine, a brilliant but vulnerable British artist with a motive for revenge against all the victims. Nathan, however, isn’t convinced, and sets out to prove his innocence. But then Nathan himself receives an image of Death bearing a scythe, and finds himself in a race against time to save his own life…

Published by Little, Brown. Available now from Amazon and all good bookshops.