There is just one tray of sarde spinate (boned and butterflied sardines) left in the fishmonger’s. The woman next to me is eyeing them up as well, and she’s next in line. However, she makes a fatal mistake and orders some gamberi first, leaving me to strike like a Ninja and grab the last of the sardines. I immediately, of course, feel guilty and offer to give them to her, but she’s being very nice and won’t hear of it. 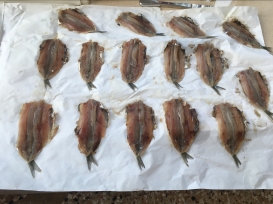 I’ve stuffed a few sardines in my time, but the idea tonight is to cook my variation on beccafico, the Sicilian dish which basically consists of a dish of baked stuffed and rolled sardines.

So here we go.

Some tomatoes, basil and olive oil

I cooked this to J C Bach’s La Clemenza di Scipione. I’ve never heard this before but I really enjoyed it.